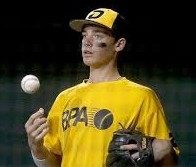 Not a little thing: For former LLWS star Hagen Danner, the future is coming at 95 mph
By Mike Persinger/USABaseball.com correspondent / June 18, 2015

Hagen Danner still has the recording in his DVR, the one of the 2011 Little League World Series game that introduced him to the world.

That day in Williamsport, Pa., in front of a national TV audience and 31,000 fans, mostly rooting for the opponent from Pennsylvania, Danner struck out 12 in 5 2/3 scoreless innings and hit a home run, leading his Huntington Beach Little League team to victory.

That team would go on to win the Little League World Series title, beating Japan in the championship game.

Danner said he watched the recording again a couple of months ago.

“I like to look back on that and remember how small we all were,” he said. “It was awesome being able to play against international teams, and it was a major step in my life where I was able to grow as a kid.”

But there are bigger steps, according to his father.

“He realizes that they were all 12 years old on a small field,” Scott Danner said. “The game has sped up and is much larger, and the talent is much greater. He gets all that.

“He doesn’t want to be remembered as a kid who had talent at that age. He wants to be known at the high school level, and as a future prospect.”

A 6-foot-2, 190-pound right-hander, Danner is versatile enough to play multiple positions, although his future is likely at pitcher.

He is also among 108 of the nation’s best high school baseball players invited to the USA Baseball National Training Complex in Cary, N.C., to participate in the 2015 Tournament of Stars from June 22 to 28.

The tournament is a step in the selection process for the USA Baseball 18U National Team, which will play in the 2015 WBSC 18U World Cup in Osaka, Japan, starting in late August.

That day in Williamsport was big, but not nearly the biggest Danner has enjoyed.

He has been committed to UCLA since before his freshman year of high school. And this year alone there was a successful trip to the USA Baseball National High School Invitational with his Huntington Beach High team, a Division I title in Southern California and Sunset League pitcher of the year honors as a sophomore.

The chance to make the 18U National Team is just the latest.

“It means pretty much the whole summer,” Danner said. “I’ve been looking forward to it a lot, and it’s like a dream.

But when he was 12, Williamsport was the biggest stage with most of the crowd cheering against his team.

“There was just this little yellow fish in the stands cheering for the West team,” Danner said.

“When I’m out there on the mound I don’t really realize how loud it is. When I’m in the dugout I can admire how many people are there and how much fun it is, but there’s not much pressure when you’re actually out there yourself.”

That pressure-is-fun outlook serves Danner well. He is at his best in big games and big situations, and his versatility could be an asset for Team USA.

“He’s an outstanding catcher, obviously can throw, blocks, understands the game,” said Jared Sandler of the Baseball Performance Academy, which fields Danner’s travel team. “He can play either corner outfield position or either corner infield position. He has a ton of power from the right side.”

But all of that is trumped by his talent on the mound.

“He’s 95 as a sophomore, and it’s an easy 95,” Sandler said. “He has great spin on the baseball, and the power breaking ball. He has the best curveball in our area for any age, and he has a plus changeup. He’s really complete.

In all the best ways, though, Danner is still a kid. He’s serious on the mound and in his training, but he also enjoys the beach, playing disc golf, soccer and basketball with friends, and just hanging out.

That, Sandler said, is a tribute to Danner and his family.

“Some kids, they maybe believe their own hype, and think they’re something bigger than they are,” Sandler said. “But Hagen is like, hey, this is cool, I’m a really good baseball player but I’m Hagen Danner, I’m a 16-year-old kid.

“The family doesn’t treat him differently or treat others differently, and he doesn’t do that either.

He’s a super good kid and a great teammate. Just a regular kid.”

But he knows when to turn it on.

“I still like to have fun, but I get serious because I’m a very competitive person,” Danner said. “I hate losing. If you try to pull me out of the game, I’m not going to be happy with you. That’s just kind of how it goes.”

In Cary, the opportunity goes further.

He’ll also look at the pressure as part of the fun.

“He is one that doesn’t try to put a lot of pressure on himself,” Scott Danner said. “He just wants to go out and play the game the best that he can, and I suspect he’ll be fine with that.”

Although he’s an accomplished hitter and can play multiple positions, he says he’ll eventually be fine with being only a pitcher. He committed to UCLA as a catcher, but when they saw him pitch as a freshman in high school, the Bruins said they’d work with him.

Danner’s future is on the mound, Sandler said. And it’s coming quickly.

“In all honesty I’d be pretty surprised if he goes to college,” he said. “A lot of things happen in two years, but he’s a projected first-rounder, and he’s got a long way to go playing this game. He’s the real deal.”

Danner said he’s not thinking much about the 2017 draft at the moment.

“During the draft period, where kids are all getting drafted, it’s kind of a cool thing to be like, maybe one day that will be me,” he said. “It would be a dream come true, but I kind of like to think about the present. I’m not a big future guy.”

He’s not stuck in the past, either.

“As big as the Little League World Series was, there are a lot of bigger, better things ahead for him for sure,” Sandler said. “That doesn’t define him. That’s just sometimes a way to distinguish somebody because a lot of people knew who he was from that. But he’s clearly carved his own path.”

In Cary, he’ll find out if the path includes USA Baseball’s 18U National Team.